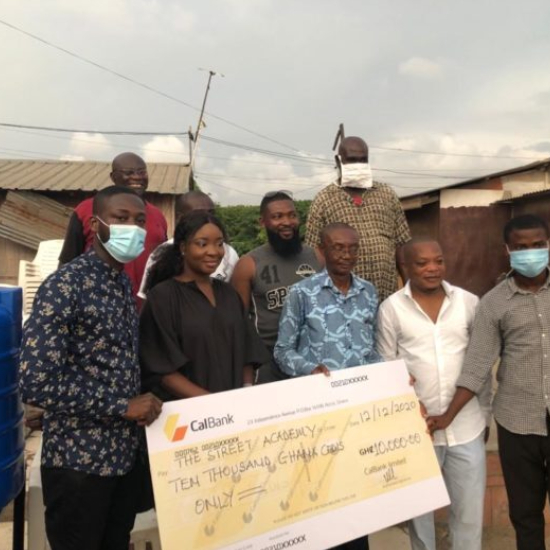 “Street Academy has been one of the numerous institutions that CalBank has supported over the years. The bank is fully committed in its Corporate Social Responsibilities to achieve an impact in our communities in which we operate to help in the alleviation of poverty and assistance to the underprivileged.  Our Corporate social Responsibilities are underpinned by four pillars namely sports, education, culture, and health, and over the years CalBank has undertaken many initiatives to help in supporting these sectors”, he added.

Receiving the dummy cheque was the Director of Street Academy, Mr Ataa Lartey, who thanked CalBank for their timely support during this pandemic and assured that, the donation received would be put to proper use. “I want to thank CalBank for their unflinching support over the years. On behalf of the Street Academy, we say thank you for this kind gesture and we are very grateful,” he added.

Street Academy, a nonprofit sports and cultural institution, which has been in existence for the past 25 years, sees to the well-being of the less privileged in society. The academy uses education, culture, and sports to showcase the hidden talents of the less fortunate children living on the streets of Accra.