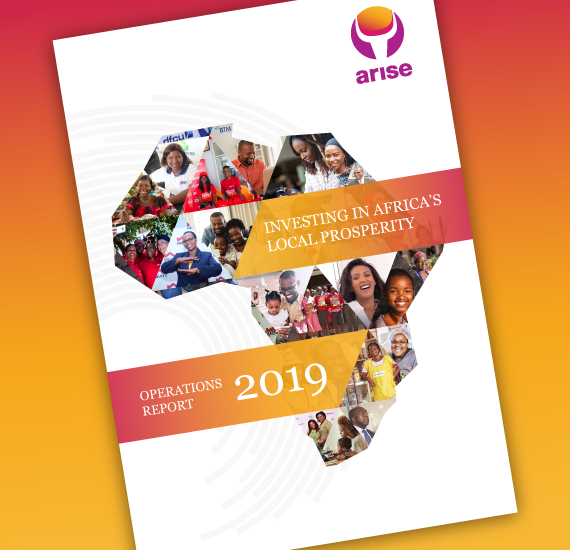 Arise is excited to release its Operations Report 2019, which showcases the successes and highlights of the organisation for the period 1 January – 31 December 2019.

Arise’s third year of operations saw the organisation make significant strides in delivering on its mandate to invest in Africa’s local prosperity through collaborative partnerships with sustainable financial service providers on the continent.

A key highlight in 2019 was Arise’s investment in Ecobank Transnational Incorporated, which allowed Arise to expand its investment footprint into Central and Western Africa. During 2019 Arise continued to forge deeper relationships with its respective partner banks and to add value across every facet of their business. We are also pleased to report that, despite the challenging macroeconomic climate, the majority of our partner banks remained profitable, grew their businesses and advanced their digital service offerings.

Arise has continued to play a vital role in sustaining and contributing to Africa’s financial services sector. During 2019 Arise was able to grow its combined asset portfolio from USD 749 million to USD 941 million. The organisation recorded a profit of USD 78,8 million an increase of 17% from the USD 67,4 million in 2018. Arise also received a total of USD 20,1 million in dividends from its partner banks, based on their 2018 performance and paid its shareholders USD 14 million in dividends.

Arise’s ability to realise its business objectives has, in turn, delivered satisfactory impact on its partner banks, enhancing their socio-economic impact in Africa by putting in place inclusive financial systems, which contribute to economic growth, strengthen rural development and alleviate poverty.

We look forward to building on the momentum made over the last three years and look forward to making a tangible impact in terms of advancing economic growth, contributing to poverty reduction and to social upliftment on the African continent.

This document is best viewed on Adobe® Reader®