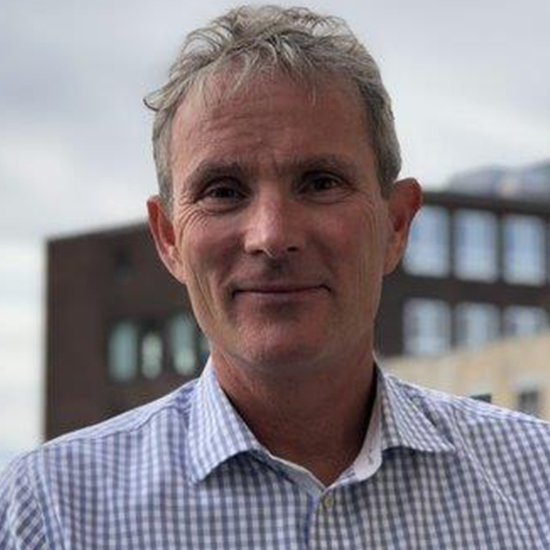 “I firmly believe in strengthening the private sector in job creation through the establishment of new companies and by providing critical infrastructure. This will improve people’s livelihood and reduce poverty. It doesn’t mean I am negative to traditional aid. It only means I believe investments are very important and that my skillset can best be applied to this area,” says Tellef Thorleifsson, Norfund’s new CEO.

Norfund’s new CEO is an experienced investor, best known as a lead investor in successful tech companies such as Spotify, but also a person with broader interests and a global commitment.

Below we get some more insight into what drives him…

Tellef’s international interest started years back, in the early 1980’s, when he went to an international school in the UK. He tells us that he was sharing a dormitory with guys from Senegal, Italy and the US, and that this international environment encouraged him to search for ways to make use of his resources to somehow contribute to make the world a little better. He chose a combination of business studies, political science and international relations. His first job was as a political advisor at the Oslo municipality.

“My plan was to continue in that direction”, he says.  “But things changed, and I got an offer to work in a shipping company which at that time was the sector in Norway that provided the most international exposure.”

Realised that the technological development would reshape the world

After having worked for two different shipping companies, he decided to make a real shift in his career.

“When I got my first browser in 1996, I realized that a fundamental transformation was on its way and that this was going to reshape the world generating great business opportunities. As the traditional shipping sector wasn’t really open to innovation, I decided to quit my job. This was a real shift in my career, but my experience from commercial investments and some good investor contacts were helpful. Together with a few others we set up a small company, a venture firm, with the idea of teaming up with entrepreneurs building new tech companies.”

Tellef refuses to call himself a “techy” although technology has been fundamental in most of the investments he has dealt with.

“I saw that we could dramatically change a number of existing industries by applying new technology. One of the first areas we started investing in through Northzone was the online classifieds market. Together with entrepreneurs, we co-founded an online recruiting company called Stepstone; we seed invested a UK based online travel company called Lastminute.com and so it went on and on. Northzone gradually became a large and profitable company with offices in Stockholm, London and New York.”

Wanted to apply his experience in an impact related area

In 2007, in parallel with Northzone, Tellef and partners started an impact fund, Voxtra.“We were a small group that wanted to use our skills from private equity in a different setting.  It got started by channelling grants into measurable market-based projects in the developing world. However, gradually we realized that grant funding had its limitations in terms of scalability, and we decided to set up a small impact fund that could take active ownership in businesses. We looked into different sectors, but for various reasons we decided to go for the agriculture sector, reaching out to smallholder farmers in East Africa. Doing agribusiness is difficult. It might have been easier if we had started with clean energy or the financial sector.”

Tellef tells us that Voxtra was his way into impact investments and how he got to know Norfund.  At that time, this was only a side business for him, as he was committed to Northzone. Yet, by being involved in Voxtra he learnt a lot about the added challenges facing entrepreneurs and investors in East Africa. He says

“It is never easy to build a business. But building a scalable agribusiness in Eastern Africa, seems to me to be just as hard as building a large tech company in Europe. It certainly requires even more stamina and endurance!”

Tellef has spent more than 20 years as a Managing partner of Northzone. It started as a small local venture firm in Norway, but it is now ranked as top 3 in Europe. When we asked about his key investment criteria, he answers that when assessing an investment opportunity, the most important factor is the quality of the team, and thereafter and much further down the list comes scalability, technology uniqueness, market opportunity and so on.

“Although my main investment experience is from the tech sector, I believe that the tech component tends to be exaggerated.  Building a business applying tech is much more about people than technology. The key is in building teams and in putting skills together. In Norfund I see my role mainly as being a teambuilder, setting the course and to inspire. It is essential that we are building a sound corporate culture, and that we are pulling in the same direction in order to deliver on Norfund’s mandate. So, in that sense there are strong similarities to what I have done before.”

When announcing Thorleifsson as the new Norfund CEO, Kristin Clemet, chair of the Norfund board, stated that Thorleifsson’s expertise, experience and engagement for Norfund’s development mandate makes him the right person to lead and further develop Norfund. One of his first and major tasks is to set the foundation for a revision of Norfund’s strategy.

“The world is changing fast. The energy sector revolution for example is changing the landscape we work in, and within the financial sector fintech forces us to rethink and reconsider how we are working.  And Norfund has been growing fast as a team – so I also need to focus on organisation and adjust it in line with the new strategy.”

Norfund is and will continue to make a difference

Tellef says he chose to work for Norfund because he believes in the importance of strengthening the private sector in developing countries.

“Unless we are able to create jobs and foster livelihoods in Sub Saharan Africa, there is no way we can stop the migration wave and substantially reduce poverty. I believe that what Norfund and other DFIs are doing is increasingly important. Especially knowing that the flows of foreign direct investments to Sub Saharan Africa has been declining.

Norfund and other DFIs can show the way, be door openers and take high risks, but the corporate sector also has to step up. Most western companies are under-invested in Africa and South East Asia, they fail to grasp the growth potential and they run the danger of losing out. Hence, from a purely commercial perspective they should also be more active. I also see an interesting potential in having a share of private pension savings being shifted to growth areas outside of Europe, Japan and USA. Such capital inflows could be a lot bigger than the DFI funding.”

Ready to travel and going fast

When we ask him what he looks most forward to in his new job, he answers that he is very eager to work with clever people with interesting backgrounds from different cultures and geographies.  Norfund has offices in Africa, Central America and Asia, and Thorleifsson plans to visit them all as soon as possible.

“I believe it is important to make sure that Norfund works as one firm. That we are closely aligned, independent of where we are based”, Tellef says.

And he is an efficient and fast-moving man. Traveling to the other side of the world already in his second week in Norfund, his medical doctor wife and three daughters need to get used to not seeing him every day.  Tellef tells us that his daughters are students and not at home that often, so he is now free to travel. However, being a typical Norwegian, he will be sure to spend some nice weekends home in Norway doing outdoorsy activities like sailing, skiing, kiting and other sports activities that go fast.