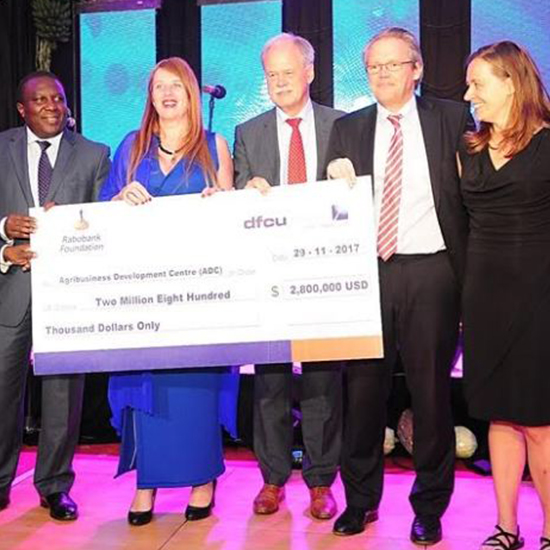 Farmer Based Organisations (FBOs) that have the potential to contribute to the agricultural value chain have been afforded an opportunity to improve their operations and ultimately become bankable.

The organisations that currently lack technical or structural capacity to operate in a sustainable way have started receiving technical support from the Agribusiness Development Center (ADC) with the backing of dfcu Bank & Rabobank Foundation in Netherlands. Both dfcu & Rabobank Foundation have injected a combined USD 2.8 million (two million eight hundred thousand US dollars) for the next five years.

The ADC which was established in October 2017 has equipped 44 farmer leaders from 20 FBOs from Lira, Dokolo, Kole, Alebtong and Oyam with skills in governance.

According to ADC Executive Director, Anja de Feijter the ADC business advisory team pre- visited over 100 farmer based organisations country wide in 2017. Since October 70 FBOs have been selected to receive the training skills in governance; financial management; financial literacy; marketing; risk assessment and so much more. “With these skills, the FBOs will continue to grow their operations in ways that are of beneficial to themselves and the broader communities,” she added.

Speaking at the official launch of the ADC in Kampala in December last year, dfcu Bank Chairman of the Board Jimmy D. Mugerwa, commended the efforts being taken by the farmer based organisations to acquire finances through forming groups. “Agriculture is the number one breadwinner for our country and there is need for collective effort to support it. By facilitating ADC in its operations dfcu and Rabobank are building capacity for the farmers to access much needed financial services,” he said.

“dfcu Bank already provides tailor-made products for the farmers and with the capacity building delivered through the ADC the small holder farmers will be more eligible for financing from commercial banks. They will also be better placed to increase productivity and possibly embrace commercial farming, which is more profitable at household and national level,” he added.

The launch was presided over by His Excellency Henk Jan Bakker, the Ambassador of the Kingdom of the Netherlands, who is also the patron of the ADC.

The ADC commenced its operations in Eastern, Western, and Northern Uganda. Lira is the first district whose Farmer Based Organisations received two-day training in the introductory module for cooperatives.

The ADC envisions promoting self-sufficiency as an effective tool to transform the agricultural sector in Uganda. This can be achieved by strengthening FBOs in respect of efficiency and creating economies of scale, to make them profitable, sustainable and bankable enterprises that are able to provide efficient and effective services to their farmers.