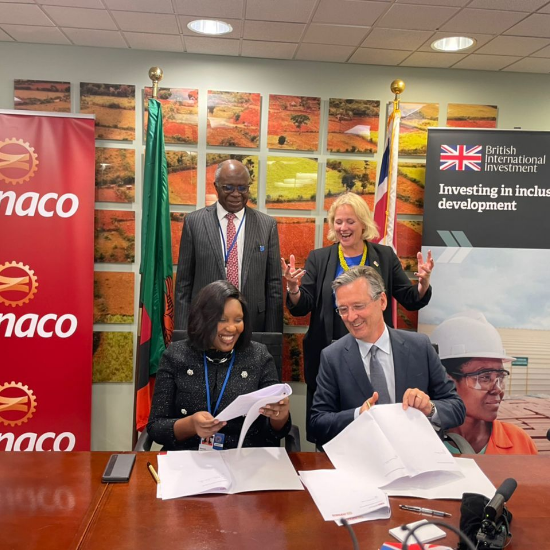 The ceremony held on the side-lines of the just ended World Bank – International Monetary Fund (IMF) Annual General Meetings, is a key milestone in unlocking the potential of MSMEs and accelerating efforts to develop a private-sector led economy.

Disbursement of funds will start before the end of this year.

Speaking during the ceremony, Dr Musokotwane said, “the development coincides perfectly with what Government desires to see in as far as development is concerned. Our priority now as we get out of debt stress is to push in as much investment as possible so that we can create jobs and opportunities for young people”.

Dr Musokotwane said Zambia like many other African countries has a young population and this puts pressure on the country to ensure that jobs are created and livelihoods are improved. He said Zambia is witnessing a transition that has attracted new investments. “We have a good history with the former CDC and some of its investments still remain the jewels in the Zambian economy. I want to urge you to do more. The climate is being improved and this is the time to invest,” he said.

And Ms Ford said Zambia has made remarkable achievements in the recent past as witnessed by the economic stabilisation and the green economic journey being undertaken.

“The Zambian Government has been renegotiating its debt and also planning for the future. This facility is about the future because it is unlocking the potential of MSMEs who are the back-bone of the economy,” Ms Ford said.

And Mrs Chibesakunda said the facility will form a foundation for the growth of MSMEs in Zambia.

“This is a privilege for Zanaco to be the first institution to sign such a facility with the BII and we believe this will set the right conditions for the growth of the Zambian economy. Economies grow when MSMEs grow as they create employment. This facility will focus on women led MSMEs and MSMEs with a climate agenda because that is where the future lies,” she said.

And Mr O’Donohoe said the organisation remains committed to support Zambia’s growth trajectory as evidenced by the facility with Zanaco.

“We committed to President Hakainde Hichilema when he told us that ‘now was the time’ to invest in Zambia when we met at the COP26 in Glasgow last year,” Mr O’Donohoe said.